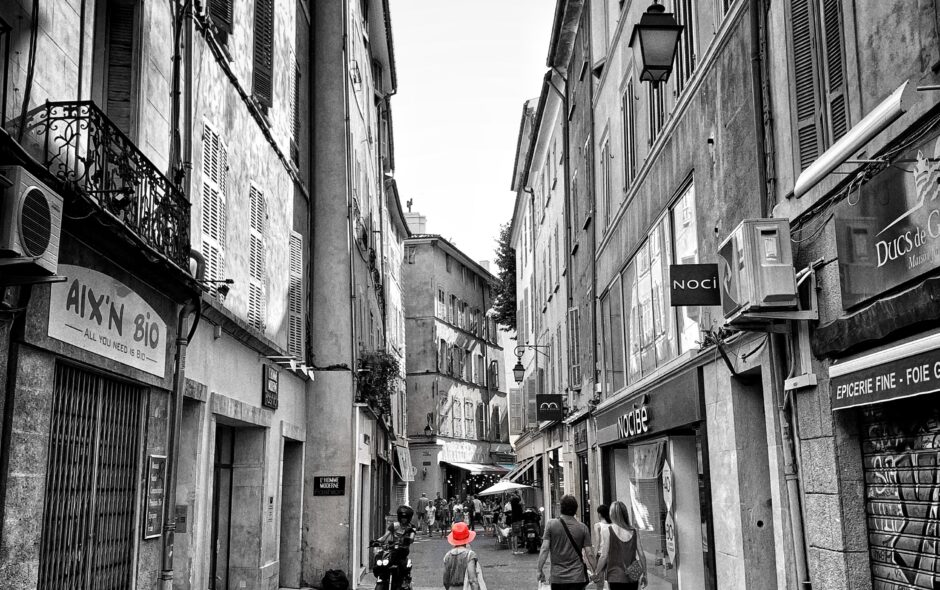 They couldn’t go back and look for the hat she had left in the station. He had given her a red hat, the kind that was fashionable just now, and could be pulled down to cover her ears—“a dash of color,” he said, that would keep her warm where they were going. On the road, it was because of the chill that she reached up and knew it was gone, left in the loo where she had ducked when the sergeant strode past them toward the trains.
They had been walking quickly since leaving the station and the woods on either side of the road were thickly dark. A half a mile behind them, though, the lights of the station were still visible.
She grabbed his sleeve, “My hat. It’s gone.” She pulled him to a stop. “I have to go back—it’s my hat.”
No time, he said, the car meeting them so early in the morning; already close to three o’clock. They must get there before dawn. Before they set out, they had dozed, huddled against one another on one of the benches, grateful for the station’s shelter. Once, when a train steamed to a halt, they had stiffened and gripped one another’s hands, but only an elderly couple, their net bags bursting with vegetables, heads down, pushed through the door and moved like pack mules toward the exit.
When she first unwrapped the tissue paper she had laughed, “The red is so bright. People will think I’m a prostitute.”
He had placed it on her head and stood back smiling. “And what if they do? In a few hours, we will be gone. No one will even notice us there. And besides, people be damned, it suits you.”
Later, seeing herself in the mirror, in the dim glow of the ladies’ room, she was pleased. He was right.
Now, surely there was time to go back. She had to make him see. “But you just gave it to me. It’s our good luck charm.”
He was abrupt. “No.” Then, more gently, “You are beautiful without a hat.” He stopped,
put his hands to her face and kissed her. “Don’t worry about your hat. Trust me.” He glanced
toward the side of the road and squeezed her arm. “When we are safe, I will buy you a new one.
You still want to, yes?”
She did not smile. “Yes” If they caught up with them the hat would be the least of her worries and yet—if it was an omen? They walked faster, leaving the lights of the station behind.
The horizon was just visible against the backdrop of the rose and orange dawn when they approached the roadside inn where the car would pause only long enough for them to jump in back. They had minutes to sit, exhausted; the brass bars on his collar dull now in the faint morning light. Only a few minutes. Raymond would be on time. And yet, the sirens were no surprise and, listening, they held each other and he stroked her hair.

He had been watching it for two weeks. A terrible month before that—her death by her own hand, the blood he’d scrubbed off the bathroom floor, and finally the quick and dirty burial, the priest scuttling away without looking at him (at least he gave her a blessing), the coffin slammed shut and him, parked with a flat tire next to the cemetery. All the unfinished…but wasn’t that always true?
At first, it had been nothing, a bump—not even a bump, a lift in the ground. You could mistake it for the burial mound of a bird, interred by small children. He imagined them saying childish prayers for their pet budgie, Hamish, and then running, laughing, back into their yard. By Tuesday, it had the heft of a gopher run, a Lilliputian temple; but there were no gophers, not the way there had been on the island when he was a boy.
Thursday, it was the size of a shoebox in the morning and by evening you could see, even from the window, it had widened to a hatbox and risen two or three inches. When he let Chester out, the scrawny mutt went straight for the protrusion and sniffed and whined and looked back at him as if to say, “What the—?” So he had walked out, knelt down, put his palm on the dirt and felt its warmth. Warmth. Was it moving? He’d had a whiskey, but not enough to make him feel the earth move, in any sense. That night he went to Mass and sought forgiveness for her, for them, most of all for himself, hoping on Friday morning to see the grass, flat, uneventful, as it had been the day of her funeral.
Hoping something he had done would make the difference.

Margery Gans is a forensic psychologist who has been writing since childhood. In 2015 she received her MFA in fiction from Spalding University’s Creative Writing Program. She has published a Creative Nonfiction piece in The Louisville Review and is working on a novel. Born in New York City, she has lived in Massachusetts 48 years. When not working at her day job or writing, she reads, photographs, and flies her small airplane.